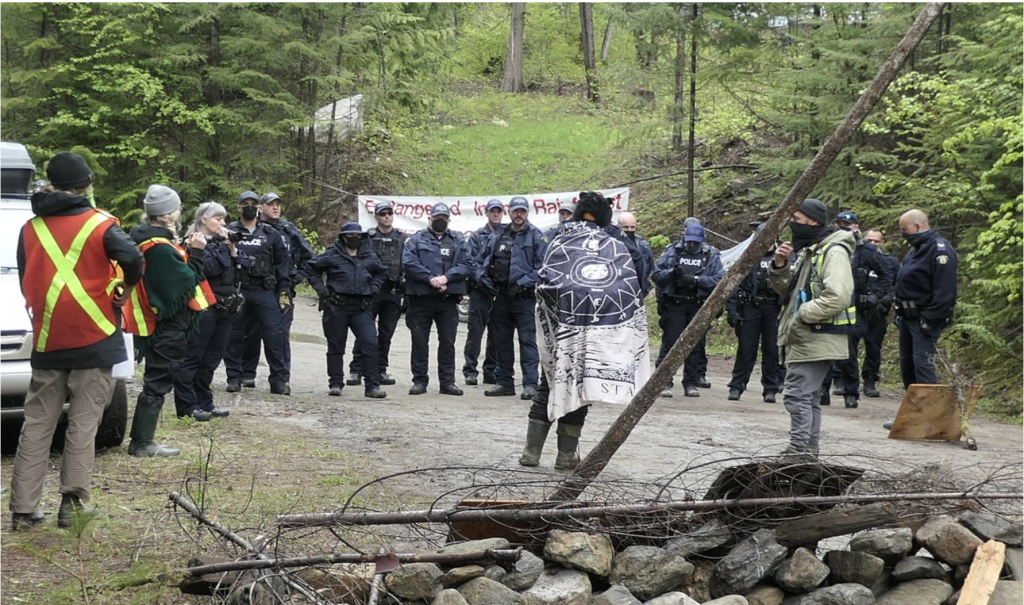 Protestors and RCMP face off at Argenta-Johnson Landing. Photo: The Wilderness Committee.

A coalition of groups have filed a joint complaint against the RCMP for alleged unlawful police actions during a logging protest in Argenta, B.C.

On July 21, the BC Civil Liberties Association (BCCLA) and seven other groups have submitted a joint policy complaint against the RMCP’s Community-Industry Response Group (C-IRG) for alleged egregious behaviour and unlawful arrests during a raid of a protest area at B.C.’s Argenta-Johnson’s Landing.

Meghan McDermott, BCCLA policy director, said: “Effective oversight of the RCMP and its C-IRG Unit is desperately needed to safeguard our rights to freedoms of expression, association, and assembly to engage in protest and dissent. We are deeply disturbed by this unit’s oppressive actions on May 17 and call upon the Civilian Review and Complaints Commission to urgently investigate our complaint and make their findings public.”

The complaint details that on May 17, the C-IRG unit raided a protest camp and soft blockade known as Grouse Camp by establishing two exclusion zones followed by approximately 18 arrests, “including gratuitous aggression, of those allegedly in contempt of an August 2019 order known as the 2019 Salisbury Injunction.”

The coalition said the protest camp was set up by Last Stand West Kootenay, with the support of local Indigenous group Autonomous Sinixt, in opposition of logging in the area by Cooper Creek Cedar Ltd.

“The C-IRG have a history of denying court orders, making unlawful arrests, restricting freedom of the press, and abusing their power. What happened in Argenta is a sustained continuation of the actions of an unrestricted and uncontrolled unit that brings the court’s reputation into disregard,” said Last Stand West Kootenay’s  Jordan Miguel Pastor.

The coalition added that most of the arrestees associated with the campaign claim they were standing off to the side of the road at the time of arrest. The group added that written statements submitted in support of the formal complaint attest to arbitrary arrests and detentions and the C-IRG unit refusing to allow many individuals to leave the Grouse Camp site without being arrested, despite these individuals attesting that they did not breach the 2019 Salisbury Injunction.

Lawyer Noah Ross filed the complaint with the chairperson of the Civilian Review and Complaints Commission for the RCMP in Ottawa, on behalf of the Argenta arrestees.

“We have filed this complaint to hold the C-IRG Unit of the RCMP accountable for their conduct at Argenta on May 17. The C-IRG appears to have made a series of unlawful arrests and implemented an overbroad exclusion zone, resulting in substantial breaches of constitutional rights, including freedom of expression and freedom against arbitrary arrest and detention,” Ross said.

Members of the coalition include the Last Stand West Kootenay, the Autonomous Sinixt, the BCCLA, the Wilderness Committee, Lawyers’ Rights Watch Canada, Mount Willet Wilderness Forever, From the Heart Kootenays and Fridays for Future Nelson.

Read the full text of the coalition’s formal complaint.